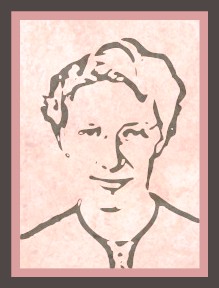 My mother was proper, not so much in terms of which fork to use, but more in what she saw as acceptable and appropriate behavior and language.  Crass speech and risqué dress were two things she could never tolerate.  That is what made it so odd when in her nineties she began subscribing to Elle, and Cosmo, and other publications she declared trash the moment they began arriving in her mailbox.  My sister and I would cancel each subscription as soon as we realized she had ordered it, only to find it had been renewed by Mom just as quickly. This back and forth went on continually during the last few years of her life.

When we were cleaning out her house stacks of these fashion magazines sat beside her recliner and overwhelmed the end-table by the sofa.  Thumbing through an issue of Elle I was struck by an article by Holly Millea.  Millea reflects on her career as a journalist speaking of all the people she had interviewed through the years.  She is looking back following the death of her own mother thinking,
"I'd spent twenty years interviewing celebrities and never
interviewed the most beautiful, fascinating woman the world
will never know.  Which has left me overwhelmed with
unanswerable questions and regret and guilt that I never gave her the kind of attention I'd given to total strangers.  Shame on
me that the only story I've ever written about my mother was her obituary."
Millea's words were a punch to my gut.  There are so many things I will never know about my own mom.  Losing her mother as a toddler and being handed over to an aunt and uncle to be raised must have made an indelible impression on her.  Yet she rarely spoke about her childhood.  When she did it was only to tell one of a couple of stories which did little to illuminate the nature of the people who raised her or the relationship they shared.
There are so many questions I realize now that I should have asked.  Were they good to her?  Did she have a happy childhood?  Was she safe and loved?  I can't say now why I failed to ask these questions.  Perhaps I instinctively feared I wouldn't like the answers.  Or maybe I took for granted I would always have time to ask later.  I only know my opportunity is gone now, and there will always be pieces missing in the picture I carry with me of my mother because I did not ask.