Light in the Darkness of Dachau

Spoiler alert:  If you hope to visit Dachau some day and want to experience the memorials without any preconceived expectations,  don't read further.  I share not only photos, but interpretations of the message conveyed in each memorial as I understood them.  After the heavy sadness and disbelief of what we had seen in the camp,  I was very moved to discover the strength and faith that was palpable in each of the memorials at the end of the tour. 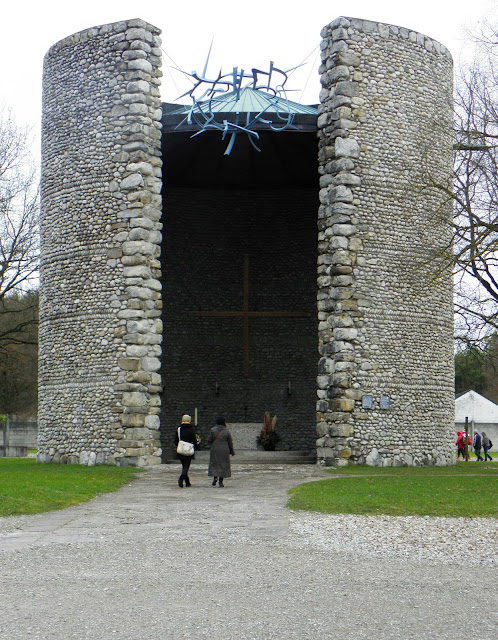 As you walk to the end of the gravel road that ran between the rows of barracks that housed prisoners, you arrive at the gathering of memorials.  The first is a Catholic memorial: Church of the Mortal Agony of Christ.  Many of the prisoners at Dachau were Catholics from Poland, Italy and France imprisoned for their anti-Nazi stance and resistance efforts.  The structure is concrete covered both inside and out with rocks from a nearby river.  A metal sculpture depicting Christ's crown of thorns hangs overhead in the entrance, and a cross hangs over an altar inside the structure. 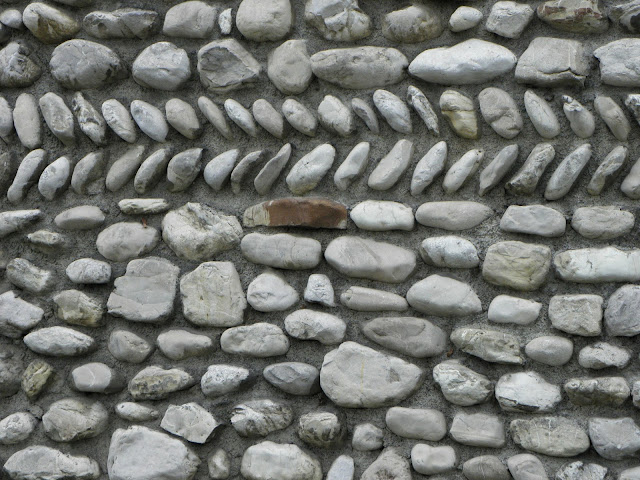 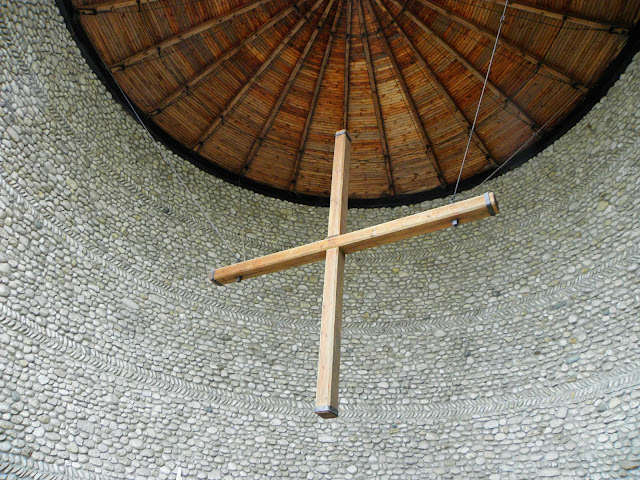 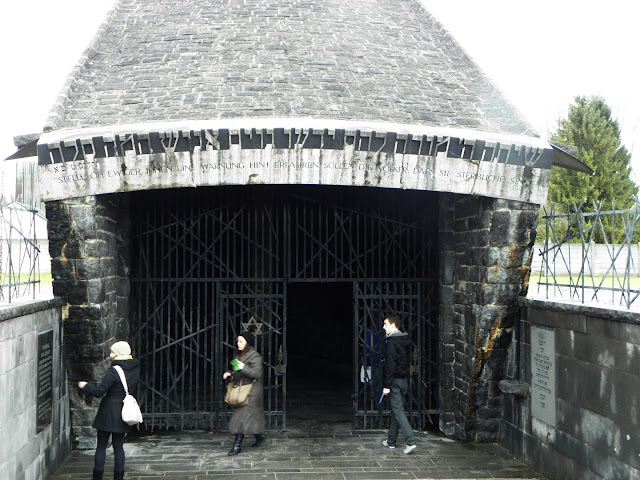 The Jewish memorial was my favorite, though at first it seemed foreboding.  It is built of basalt lava, giving it a dark almost dingy look.  The floor of the interior is six feet underground which made me wonder if it was meant to signify the grave.  Instead, the underground positioning is a reminder of those who attempted to find hiding places from the Nazis.  You descend a wide ramp into the memorial.  Overhead is a railing that provides a clear reminder of the barbed wire enclosing Dachau. 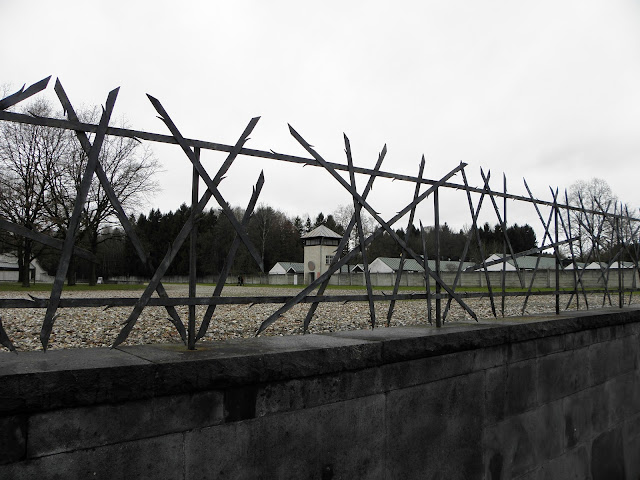 I went down the ramp into the memorial with some reluctance.  Once inside I immediately saw the shaft of light from the topmost point of the prayer room illuminating a pillar of marble.  It took my breath away as I understood what the architect was saying-- the Holocaust pulled us down into the deep pit, the darkest depths of despair, yet even then there was hope and the promise of salvation. 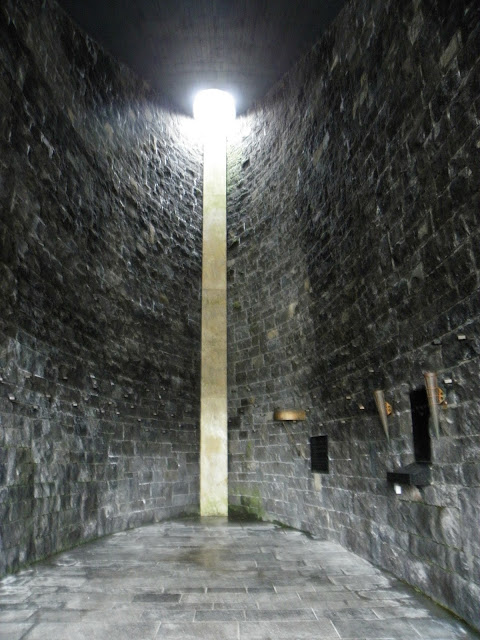 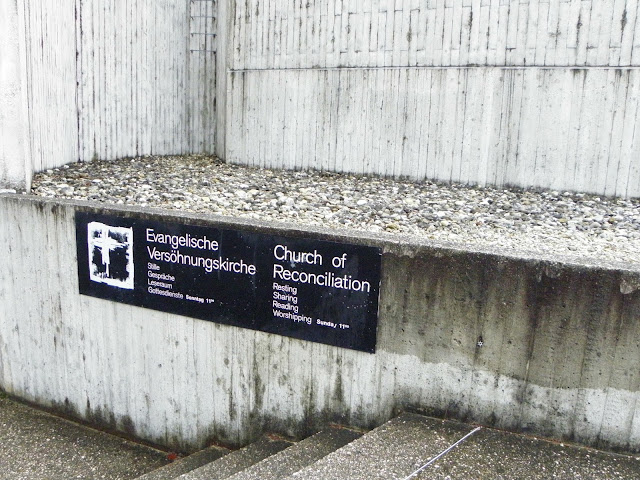 The Church of Reconciliation is a haphazard looking structure made of gravel and unfinished concrete.  It stands as a protest against the Nazi insistence on order and tradition.  It is the Protestant memorial at Dachau.  After all we had seen and heard that day, it provided a much needed chance to light a candle and pray. 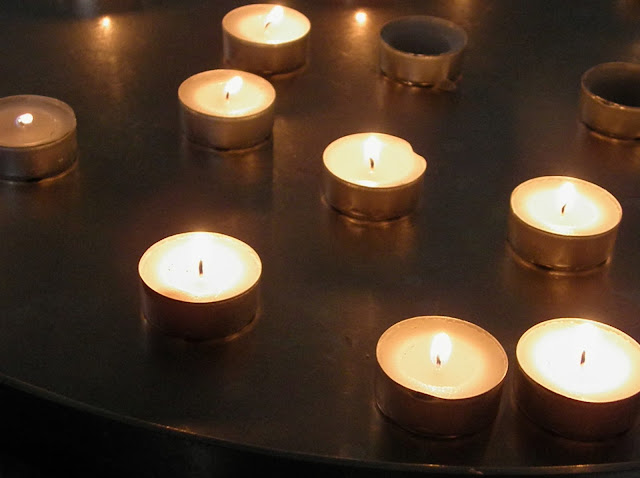 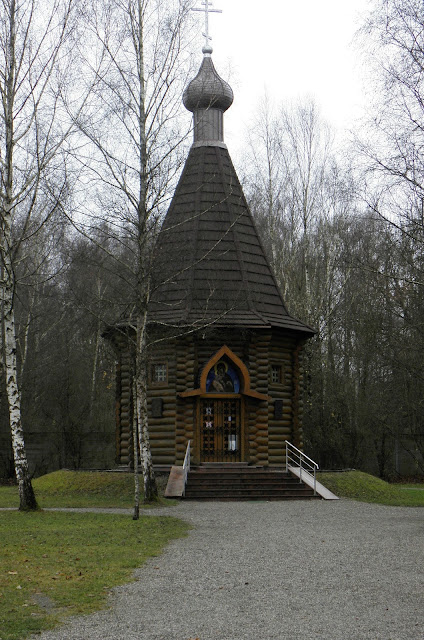 The Russian Orthodox Chapel: Resurrection of Our Lord was built on the 50th Anniversary of the liberation of Dachau by American soldiers.  It sits atop a mound of soil brought in from the Soviet Union, and honors the roughly 6,000 Russian prisoners who died here. 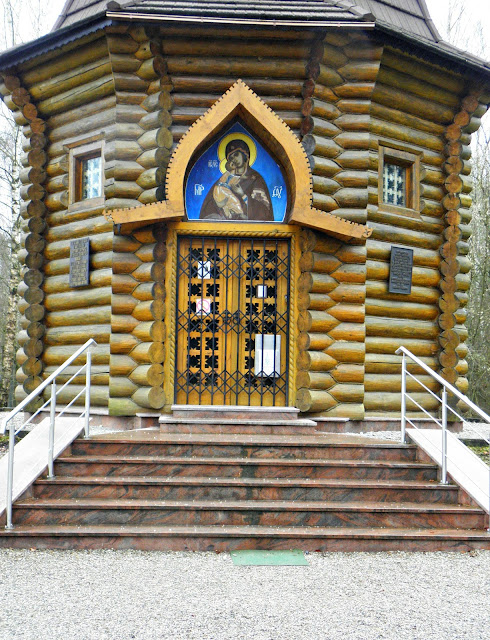 Thoughts from the Service of Remembrance at Temple Beth Sholom Topeka, Ks  Friday, May 6, 2016

If we were to begin tonight counting off each second of time in honor of someone who was killed during the Holocaust, we would need to continue counting seconds until August of this year.

The good suffer and the best suffer most, because it is the just and the true and the righteous that take upon themselves the task of bringing justice and truth into the world.

As we recall their unanswered cries, we must pledge ourselves never again to be silent in the face of tyranny or injustice.  We must transform grief into compassion.  We must give evidence of our remembering them through acts of kindness and courage.  Thus will our actions serve as monuments of the spirit to those who perished.