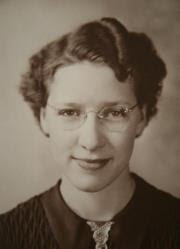 When this photo was taken my mother was young and single.   She had no way to predict that she would be granted ninety-three years of life on this planet or be partner in a marriage that lasted over fifty years, ending only with the death of my father.  She could have had no idea she would carry ten babies under her heart, but see only eight of them survive her.
She is so young in this photograph.  The slight smile on her face and the gleam in her eyes hint at a heart filled with dreams.  I will never know what those dreams were.  Never know how many of them came true.  I can guess that having grown up an orphan she was anxious to get out into the world to make a life of her own, but she never told me that.  She offered very few glimpses into the life she had led before this photo was taken.

On summer nights we used to sit on the front stoop and look at the stars.  She often talked about the dreams she had for my future.  The world was moving fast then, and she saw fantastic changes in technology coloring the world I would know.  She would make outrageous predictions, and we would laugh.  As the laughter faded and she grew quiet, her gaze would return to the stars.  We would sit quietly each lost in our thoughts.  How many of her thoughts were of the young girl in this photograph and the dreams in her heart?  She would not say, and I would never know.
Posted by May at August 20, 2018